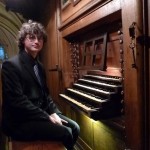 Born in 1982, Yoann Tardivel Erchoff starts his musical training at the Gustave-Charpentier Conservatory. Then he continues his studies at the Conservatoire National de Région de Paris , taking part in organ, piano and orchestration classes. At the end of his professional training cycle he obtains a First Prize in interpretation (organ). At the same time he is studying orchestra conduction with D.Ruits at the École Normale de Musique in Paris.

Between 2003 and 2006 he continues his organ studies with Francois-Henri Houbart at the Conservatoire National de Région in Rueil-Malmaison, where he obtains unanimously the Excellence Prize as well as the Prize for Virtuosity.

He studies then organ under the direction of Michel Bouvard and Olivier Latry at the National Academy of Music in Paris and improvisation with Philippe Lefebvre and Thierry Escaich, where he obtains the first prize in interpretation  with the highest distinction.

Joint organist at the Historic Great Organ in Notre-Dame des Vertus in Aubervilliers, Yoann Tardivel Erchoff is awarded the first prize in interpretation at the International Competition in Toulouse in 2008, playing a program dedicated to works from O. Messiaen, G. Amy, V. Aubertin et J. P. Leguay. Thus, he is holding the title of organist at the E.C.H.O. (European Cities of Historical Organs) during the year 2009 and will give recitals in 11 European Countries, on instruments which are counted among the most beautiful jewels of organ heritage. 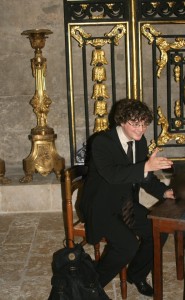