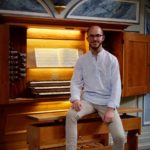 Yanis Dubois is 25 years old. He took his first organ lessons with Anne Dumontet at the local music school in Lisieux. In 2009, he went to Caen to continue his studies at the Conservatory with Erwan Le Prado and Saki Aoki, being awarded the organ prize with honours, graded „very good“. Afterwards, he completed his studies with Constance Himelfarb in composition, harmony, improvisation, basso continuo, history of music and analysis.

During his studies he took part in master classes with well known teachers: Olivier Houette, François Espinasse, Thierry Escaich, Michel Chapuis and Wolfgang Zerer, and also in Denmark at the Royal Academy of Music in Copenhagen with Hans Davidsson and Byne Bryndorf.

He has given various concerts on organs in the northern part of France: in Caen, Lisieux, Vire and Coutances, and the public could listen to him during festivals in Gisors and the Abbey of Lucerne d’Outremer, at Notre-Dame de Guibray in Falaise, in Argentan, and even in London.

In September 2017, he successfully passed the entry exams to the Master’s degree at the Lyon Conservatoire National Supérieur de Musique et de Danse (CNSMD), studying in the classes of François Espinasse and Liesbeth Schlumberger.

On June 23rd 2019, at the International ‚Olivier Messiaen’ Organ Competition in Lyon (17 candidates), Yanis Dubois is awarded the Third Prize and ‘Prize for the best interpretation of the new work’.