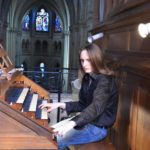 Tom RIOULT was born in 1997; he was six years old when he took his first music lessons at the regional Conservatory in Caen.

2015 he passed his A-levels at the Conservatory, section ‘music and dance’ as well as the trombonist diploma in the class of Clément Carpentier.

2017 he obtained the organ diploma (in Mai) as well as the A-levels in music analysis in June the same year.

Today he is entirely dedicated to completing his musical professional training, studying organ with Erwan Le Prado and Saki Aoki, deepening his practical knowledge in improvisation, and at the same time in music theory: composing and history of music.

Tom Rioult has given several concerts on organs in the northern part of France: e.g. in Caen on the instruments in the churches St. Peter and St. John, in the “Abbey aux Hommes” dedicated to St. Etienne, in Notre-Dame-Church in Vire, in Vimoutiers and Evrecy, in the cathedrals of Bayeux and Lisieux; he has also been invited to play during several festivals in Falaise (Notre-Dame de Guibray), in Argentan…..