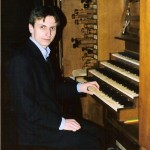 At age 20, he was appointed organist contest the Grand Organ of the Cathedral of Bourges. In 2006 he became artistic director of the Very Rich Hours of the organ in Berry, International Organ Festival of the Cathedral of Bourges. In 2003, he received the first prize of Bach’s St. Peter the Nemours (jury chaired by Michel Chapuis). He performs in concert in France and Europe, combining repertoire and improvisation.

In spring 2011, Thomas was appointed LACÔTE Great Organ of Deputy holder of the Trinity Church in Paris, on the instrument which was for 60 years one of Olivier Messiaen.

LACÔTE Thomas is a professor of writing and analysis at the CRR of Aubervilliers-La Courneuve and at the upper pole of music education in Seine-Saint-Denis / Ile de France. He is also Associate Professor CSNM of Paris from the upper class analysis of Michael Levinas.

He is the author of publications and research on composers Charles Tournemire, Olivier Messiaen and Jean-Pierre Leguay, in various journals and in the École Normale Supérieure de Lyon. He is a member of the editorial board of the journal Organs news, in which he published the chronicle “Quid Novi?” dedicated to the organ music of the twentieth century.

In collaboration with musicologists Yves Balmer and Christopher Brent Murray, he is currently preparing for editions Symmetry innovative book on Olivier Messiaen’s writing techniques, which received a special award of the jury writing the 2011 Muses Prize.

As a composer he has received commissions from Radio France, the Feldkirch Festival (Austria), the French Federation of the Little Singers, conservatories of Poitiers, Charleville-Mezieres and Paray-le-Monial. He is the author of works for and with organ (Three Studies ; Versant temperate ; Crystal time for soprano saxophone and organ) and vocal works (Caelestis urbs Jerusalem, 12 male voices a capella). His work led to the particular interest in the work on the stamp, text-music relationships, the full exploitation of the intrinsic resources of modern and old instruments or instead of space, real or metaphorical, in writing music. His last work, the Book of Psalms for organ and choir, Organ command Béthunois, was created in October 2011 by the Aedes choir and organist Ghislain Leroy.