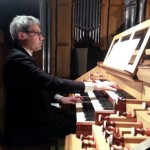 Born in Milano (Italy) in 1979, Alessandro La Ciacera was a organ scholar at Conservatorio Verdi, Milano, from 1996-2000, where he studied with Luigi Benedetti. He graduated in Organ and Organ Composition with distinction. He attended numerous master classes with Arturo Sacchetti e Alessio Corti (interpretation).

Since 2003 he is professor for organ and piano at “Pontifical Ambrosian Institute of Sacred Music” in Milan. In 2005 he took up a position as Second Organist at the Cathedral of Milan.

Within his broad range of musical interests, he has a strong focus on the music of our time : his repertoire spans seven centuries up to works by Duruflé, Messiaen, Alain.

In 2005 he is invited by Karlheinz Stockhausen to performance “Himmelfahrt” – his new composition for organ- in premiered World at Milan’s Cathedral.

Alessandro received important inspirations for his work as sacred composer from Luciano Migliavacca, choir director at Milan’s Cathedral : since 2005 he compose mass and motets for the liturgies of the Cathedral and piano/instumental compositions for the activity of teaching of the Cathedral boy’s Choir.

He was appointed member of the “Congregation of the Ambrosian Rite” since 2011 by the Archbishop of Milan.

His CD recordings are published by Bottega Discantica, and includes music by Italian romantic composers and Luciano Migliavacca. In August 2011 he will record the complete organ works of Jean Alain by Fugatto Edition. 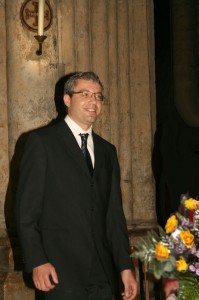