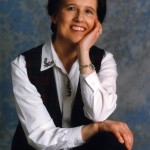 Susan Landale was born in Scotland and began her musical education in Edinburgh. After graduating from Edinburgh University (BMus), where she was awarded a number of prizes and scholarships, she was invited by the great French organist André Marchal to study with him in Paris. The following year she was appointed titular organist of St. George’s Anglican Church, Paris, a post she held for eighteen years. Today, from her home in the Paris suburbs, she pursues a many-sided career of concert organist, church organist and professor.

Winner of the first International Organ Playing Competition at the St Alban’s International Festival, England, she has firmly established a worldwide reputation as a brilliant concert artist in solo recitals, broadcasts on national and international radio networks and television, concerts with orchestra, chamber music and in performances with instrumental and vocal ensembles. She has appeared as a guest artist at many festivals as far apart as Melbourne (Australia), Reykjavik (Iceland), St. Albans (England), Calgary (Canada) and Edinburgh (Scotland).

She has been a featured soloist with many of the leading orchestras in Paris, London, Prague, Hamburg, Heidelberg and other European cities.

Her numerous CD recordings of the works of Olivier Messiaen, Louis Vierne, Charles Tournemire and César Franck have received international acclaim and the highest awards from the French critics.

Particularly esteemed as a teacher, Susan Landale is Professor of Organ at the Royal Academy of Music in London, after many years as professor at the National Regional Conservatoire in Rueil-Malmaison (Ile de France), where her pupils, from all over the world, won prizes in many national and international competitions. She devotes the rest of her time to concert performance, and recordings, presenting seminars and master classes as well as private teaching. She has served on the most prestigious international juries : St Albans, Calgary, Chartres, Prague, Odense, Lübeck, Warsaw, Brno. She is an active member of the French State Commission for Organs, the Committee of the Grand Prix de Chartres, the Commission des Orgues for the Diocese of Paris, and she is the President of the Académie André Marchal.

Author of several articles on contemporary music, her studies of the organ works of Olivier Messiaen and Petr Eben have been translated into several languages. Her interpretation of the most significant works of these composers is considered to be particularly authentic.

Susan Landale is organist of the Cathedral Saint-Louis des Invalides, Paris. In recognition of her world-wide career and commitment, the Royal College of Organists awarded her, in 2003, the distinction of “Fellow honoris causa”.