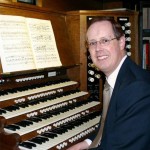 James Lancelot was born in 1952. A Choristes of St Paul’s Cathedral in London, he won a scholarship to the Royal College of Music where he studied with Ralph Downes, winning the Stuart Prize.

In 1971 he became Organ Scholar of King’s College, Cambridge and toured frequently with the choir as well as accompanying the regular Chapel services. He was appointed Sub-Organist of Winchester Cathedral in 1975. Ten happy years there saw regular service-playing and choir-training, numerous concerts, recordings and broadcasts, tours to Europe and North America, numerous solo recitals including a tour of New Zealand in 1978, and study with Gillian Weir and Nicholas Danby.

In 1985 James Lancelot came to Durham. Cathedral as Master of the Choristers and Organist, taking responsibility for the cathedral’s musical ministry and becoming organist of one of the finest organs in Britain. He has taken the choir on tour to Holland, Denmark and USA. He has worked regularly with the London Festival Orchestra. The choir records on the Priory label, and has made numerous broadcast appearances.

In addition to his work at the cathedral, James Lancelot pursues a recital career both in Britain and abroad.

Recent years have seen visite to Holland, Poland, Germanty, Denmark and the USA, as well as numerous recitals in Britain, including the celebrity series at St Paul’s Cathedral, and further CD recordings. 1998 brings engagements in seven English Cathedrals, as well as his visit to Chartres where lie was a finalist in the International Organ Competition in 1976).

James Lancelot is Conductor of Durham University Choral Society; a Council Member of the Royal College of Organists, and a member of the Cathedrals Liturgical Group.