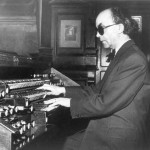 Jean Langlais was born on february 15, 1907, in La Fontenelle (Ille-et-Vilaine, Britanny), a small village near by the Mont-Saint-Michel.

Blind from the age of two, he studied in Paris at the National Institute for the Young Blind with, great teachers as, among other, Albert Mahaut, a former pupil of Cesar Franck, and the blind organist André Marchal.

At the National Conservatory of Music in Paris, he obtained a First Prize in organ in Marcel Dupré’s class of 1930 and a Composition Prize in Paul Dukas class of 1934. He also studied improvisation with Charles Tournemire, receiving in 1931 the “Grand Prix d’Exécution et Improvisation des Amis de l’Orgue”.

Professor for forty years at the National Institute for the Young Blind, he also taught at the Schola Cantorum in Paris, where between 1961 and 1976 he influenced both french and foreign students. His reputation as pedagogue, improviser and concert artist drew pupils and audiences of many nationalities, especially from the USA where he gave 300 recitals and countless master classes.

In 1945 he became the successor to Cesar Franck and Charles Tournemire at the prestigious organ tribune of Sainte-Clotilde in Paris. He left that position en 1987 at the age of 80, having been titular for 42 years.

A prolific composer, his catalog of works comprises 254 opus numbers, including vocal and instrumental sacred music (with 13 Masses, among them the famous Missa Salve Regina or the Messe Solennelle and the Missa in Simplicitate very often performed in concert), secular music (melodies, concertos) and numerous organ pages, some of which being already considered twentieth-century classics.