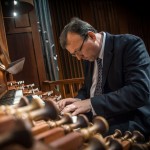 Stefan Engels was born in Germany and received his musical education in both Germany and the USA.

He studied organ, piano, harpsichord, conducting and church music at the Musikhochschulen in Aachen, Düsseldorf, and Kôln, and in 1993 moved to the USA to pursue further organ studies with Robert Anderson and Wolfgang Rübsam.

In 1998, lie won the Concerto Gold Medal at the Calgary Organ Competition.

He has performed throughout the USA, Canada, Belgium, Italy and Germany as soloist, accompanist and member of ensembles, including a recital at the 1998 Karg-Elert Festival Berlin. He has made two recordings of works by Marcel Dupré on the Naxos label which were released worldwide in 1999. He has held positions as organist, organ scholar, director of music and choirmaster in Germany and the USA.