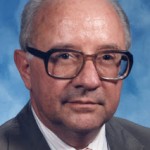 He was born on October 5, 1934 in Chicago. He received his musical training at the American Conservatory of Music in Chicago (Piano) and at Illinois Wesleyan University in Bloomington, Illinois (Bachelor’s Degree in organ performance with Lillian Mecherle McCord). Further studies followed at the Union Theological Seminary in New York (Master’s and Doctoral Degrees in Sacred Music, 1957 and 1961) and (through a Fulbright scholarship) 1957–1959 with Helmut Walcha in Frankfurt am Main. In addition, Anderson studied organ with Heinrich Fleischer and Frederick Marriott, composition with Harold Friedell and Seth Bingham and harpsichord with Maria Jager.

He wrote numerous compositions for organ solo, including a Triptych (1958), as well as a cantata, “Garden of Gethsemane,” after a text by Boris Pasternak.

Anderson was organ consultant for some of the finest concert hall organs in North America: the C. B. Fisk organs at Meyerson Symphony Center (Opus 100, 1992) and SMU’s Caruth Auditorium (Opus 101, 1993), both in Dallas, TX. He also initiated the prestigious Dallas International Organ Competition, of which he was chair in 1997 and 2000.

As a concert organist, he played numerous recitals in the United States and Europe and was invited to leading organ festivals in Nuremberg, Paris, Berlin and Vienna. He was one of the leading organ teachers of his time in the United States. Among his more than 100 former students were organists such as George C. Baker, Ignace Michiels, Carole Terry and Wolfgang Rübsam.

Robert Anderson died in Honolulu in 2009.