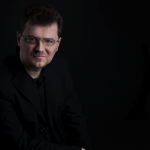 In 1996 he moved to Vienna, where he continued his studies at the Hochschule (now University) for Music and Performing Arts : Organ with Herbert Tachezi and Michael Radulescu, composition with Wolfgang Suppan.

In 1997, he was awarded three first prizes at italian organ competitions and in the following years at numerous international competitions (Pretoria, Bologna, Innsbruck, Hamburg, Toulouse). In 1999 he emerged as winner of the renowned St. Albans International Organ Competition.

From 1999 to 2002 he was awarded a scholarship by the “Stiftung Dr. Robert und Lina Thyll-Dürr” (Basel). In 2001 he spent a semester on an ERASMUS scholarship studying organ in Hamburg with Pieter van Dijk and Wolfgang Zerer.

Pier Damiano Peretti received important inspirations for his work as composer from Wolfango Dalla Vecchia and Thomas Daniel Schlee. He furthemore attended masterclasses in Composition at the Darmstädter Ferienkursen für Neue Musik (working with Wolfgang Rihm and Brian Ferneyhough) and at the Accademia Filarmonica di Bologna (with Azio Corghi).

As a free-lance composer, he increasingly accepts commissions mainly in the field of sacred music (“Die sieben letzten Worte Jesu” for vocal ensemble and string quartet, 2007; “Hortus animae”, oratorio for mezzosoprano, tenor, choir and ensemble, 2009 ; “Peje IS je” for baritone, cello, organ and percussion, 2010/11, “Vigilia” for string quartet and organ, 2011 ; “Magnificat” for soprano, choir and orchestra, 2011).

Some of his works have been awarded at composition competitions and are published by Carrara (Bergamo), Strube (München), H&H Musikverlag (Helmstadt) and Alexander Meyer (Vienna).