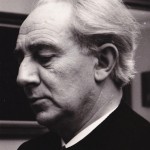 Flor Peeters was a Belgian composer. He studied at the Lemmens Institute in Mechelen and received highest honours : the Prix Lemmens-Tinel, in 1923. He was the youngest laureate of this distinction in the history of the school.

In 1923 Flor Peeters was appointed second organist at the cathedral and second teacher at the Lemmens Institute in Mechelen, both tasks as assistant for his organ teacher Oscar Depuydt, who, together with Lodewijk Mortelmans, can be seen as his most important teacher. After Depuydt died in 1925, Flor Peeters became first organist at the cathedral and head teacher of organ at the Lemmens Institute. In 1931 he was appointed teacher of organ at the Royal Conservatory of Gent and in 1935 teacher of organ and improvisation at the Roman Catholic College in Tilburg (Netherlands). He taught at the Lemmens Institute from 1923 to 1952 ; at the Conservatory of Gent from 1931 until 1948. In 1948 he became teacher of organ at the Royal Flemish Conservatory of Music in Antwerp ; from 1952 until 1968 he was also director of the Flemish Conservatory. He retired in 1968 and was given the assignment of an International Masterclass in the cathedral of Mechelen by the Ministry of Flemish Culture. He fulfilled this task until his death.

Organist Flor Peeters’ first assignment was that of church organist (1923-1986). He was a genuine liturgical improvisator, who could skilfully embellish the liturgical action with short pre- and postludes with rich tone colouring put into short patterns. He published a Practical Method for the Accompaniment of Gregorian Chant (1942). Each Sunday after High Mass, between 1968 and 1986, he performed a short recital for friends and tourists. He kept his large repertoire in good condition and this playing was a necessity for him as a mean of communicating beauty to others.

Very early in his career he was attracted to the concert life. He started in 1924 in Belgium and in 1928 in the Netherlands ; in 1929 Denmark followed and in 1934 Germany and Italy ; in 1935 Paris. After the Second World War his concert career was widely extended outside Western Europe : the United States, Great Britain, the Soviet Union, South Africa, New Zealand, Australia and the Philippines. He gave ca. 1200 organ recitals in churches of all denominations and in concert halls.

Composer Flor Peeters was a prolific composer He wrote for himself and accepted commissions from publishers. Composing was a necessity for him. His compositions have influenced his organ playing and the concert life his compositions. He mainly composed for his instrument and for choir. His compositions are characterised by a fluent invention, strongly leaning towards the Gregorian melos and the modal harmony, a preference for classical forms, the use of polyrhythm and polytonality and after 1966 also of atonality and seriality.

The esthetical evolution of his work started as late Franckian virtuosity, and went via vitalistic neo-classicism, to an introvert and sober vitality, strongly moving rhythms, contrasting in colours and with an intense lyricism. The major seventh and the minor second are the corner stones of his compositions. His spiritual choir music (a.o. 10 Masses and numerous motets) is to be seen as a personal assimilation of the Motu Proprio of Pope Pius IX of 1903. It is adapted to the possibilities of amateur choirs in the thirties. He also wrote many songs (Lieder), piano and chamber music, and concerti for organ and other instruments.

Flor Peeters is author of the largest published chorale work ever undertaken : opus 100 Hymn Preludes for the Liturgical Year (1959-1964) ; it contains no less than 213 chorale preludes on ecumenical church hymns for the complete Liturgical Year. Raymond Schroyens will dedicate two lectures to the chorale oeuvre of Flor Peeters. We will also have a lecture on some important organ works of the master.

Flor Peeters was also a teacher highly in demand between 1930 and 1980. He has educated hundreds of organists in his own country and again hundreds during his yearly master classes in the United States. He published an extensive organ method Ars Organi (1952) in three volumes and in four languages, besides the Little Organ Book (1957 with examples played by himself on his studio organ). He edited various volumes of Old Netherlands Masters for organ (1938, 1945, and 1948) and Alte Orgelmusik aus England und Frankreich, Altniederländische Meister (1958).

He brought the art of the organ to a larger public and published with others The Organ and its Music in the Netherlands 1500-1800 ; this lavish book was also available in Dutch, French and German versions (Mercatorfonds Antwerp – 1970) ; it treated the organ building (Dr.M.A.Vente), organ music (Flor Peeters) and the social position of the organist (Piet Visser), all these aspects put into a broad cultural and historical view (Guido Peeters). Through its colour pictures, charts, maps and music examples and with the two LP’s Flor Peeters made to accompany the book, it remains a unicum in the world of the organ art.