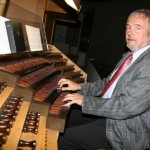 PETER PLANYAVSKY was born in Vienna in 1947 and became a student of Anton Heiller at the university for Music and Drama when he was 12. He graduated with the Master‘s Diploma in Organ (1966) and the Diploma in Church Music (1967). He then worked for one year in the workshop of a major Austrian organ builder, and for another year he served as Abbey Organist at Schlägl, Austria.

In 1969, he was appointed Cathedral Organist at St, Stephan‘s Cathedral, Vienna. From 1983 until 1990, Planyavsky held the position of Music director at that church, being responsible for choral and organ programs which in Austria are traditionally seperate jobs. In 2004, Planyavsky decided to terminate his affiliation with the Cathedral.

Since 1980, Planyavsky has also been Professor for Organ and Improvisation at the University for Music and Drama in Vienna, with the additional function as Head of the Church Music department from 1996 to 2003.

Peter Planyavsky also undertakes a full schedule as a recitalist, coach in workshops and masterclasses and as a member of juries. He has toured North America, Japan, Australia, South Africa and most European countries ; and he has recorded a small stack of CDs and records.

Planyavsky has won several prizes and awards, the latest addition being the Federal Austrian Price for Music, awarded to him for his collected compositions. Planyavsky has composed extensively for choir, organ and orchestra, with a main emphasis on liturgical works.

As a conductor, Peter Planyavsky has peformed the great works of sacred music such as Bach‘s Mass in b minor, the Duruflè Requiem and the great Haydn masses. He is putting more emphasis now on concertos for organ and orchestra (Heiller, Guilmant, Jongen, Rheinberger, Saint-Saens and others), having conducted several premier performances in Austria like concertos by Horatio Parker, Jean Guillou, Jean Langlais, Howard Hanson and Leo Sowerby.