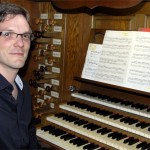 Olivier SALANDINI studied organ and harpsichord at the National Conservatory of Nice region with René Saorgin, Jean-Luc Étienne and Mireille Podeur. He continues thereafter his harpsichord studies with Bob van Asperen at the Amsterdam Conservatory, and organ with Reizte Smits in Utrecht Conservatory and received his Masters in 2008. Meanwhile he perfected with other musicians such Jean Boyer and Christophe Rousset.

In 2005 he won second prize at the International Harpsichord Competition of Bologna, and in 2006 he successively won the international organ competition in Lausanne, and in Herford (Germany).

Olivier Salandini performs regularly as a soloist and continuo player in various baroque ensembles in France and abroad (Italy, Netherlands, Switzerland, Belgium, Germany, USA). He recorded two records with Stravaganza together for Aparté firm, and a solo disc, “Jeu d’orgue” recorded on the five organs of the Saint Paul Nice.
He is professor of harpsichord and continuo at the Conservatory of Limoges.

In 2011 he was appointed organist of the great organ of the Cathedral of Bourges and artistic director of the Organ Festival “Riches hours in Berry”.

Finally it follows now a double Master’s course in pedagogy at the National Conservatory of Music in Paris for organ and harpsichord.