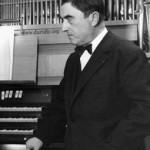 Duruflé was born in Louviers, Haute-Normandie. In 1912, he became chorister at the Rouen Cathedral Choir School, where he studied piano and organ with Jules Haelling. At age 17, upon moving to Paris, he took private organ lessons with Charles Tournemire, whom he assisted at Basilique Ste-Clotilde, Paris until 1927. In 1920 Duruflé entered the Conservatoire de Paris, eventually graduating with first prizes in organ, harmony, piano accompaniment, and composition.

In 1927, Louis Vierne nominated him as his assistant at Notre-Dame. Duruflé became titular organist of St. Étienne-du-Mont in Paris in 1929, a position he held for the rest of his life. In 1939, he premiered Francis Poulenc’s Organ Concerto (the Concerto for Organ, Strings and Timpani in G minor) ; he had advised Poulenc on the registrations of the organ part. In 1943 he became professor of harmony at the Conservatoire de Paris, where he worked until 1970. In 1947, Duruflé wrote what is probably the most famous of his few pieces : the Requiem op. 9, for soloists, choir, organ and orchestra. The same year, Marie-Madeleine Chevalier became his assistant at St-Étienne-du-Mont. They married in 1953 (after Duruflé’s first marriage to Lucette Bousquet, contracted in 1932, ended in civil divorce in 1947 and was declared null by the Vatican on 23 June 1953) . The couple became a famous and popular organ duo, going on tour together several times throughout the sixties and early seventies.

Duruflé suffered severe injuries in a car accident in 1975, and as a result he gave up performing ; indeed he was largely confined to his apartment, leaving the service at St-Étienne-du-Mont to his wife Marie-Madeleine (who was also injured in the accident). He died in Louveciennes (near Paris) in 1986, aged 84.

Duruflé was highly critical of his own composition. He only published a handful of works and often continued to edit and change pieces after publication. For instance, the Toccata from Suite, op. 5 has a completely different ending in the first edition than in the more recent version, and the score to the Fugue sur le nom d’Alain originally indicated accelerando throughout. The result of this perfectionism is that his music, especially his organ music, holds a very high position in the repertoire.