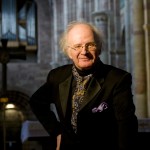 Born in 1944, he has got education as organist, pianist and conductor. He is Laureate of the International Organist Competitions in Austria, Belgium, Germany and Italy. At present time he is conductor of the Cathedral in the Saarland where he leads also Philharmonic chorus and Bach society.

In 1992-1994 he headed the orchestra to Estonian philharmonic, since 1995 he has been a main quest conductor of the Minsk Philharmonic. Kremer also teaches at germane High Schools, tales part in Jury of many International organist Competitions.

He annually conducts with Chamber orchestra of the St.Petersburg Philharmonic Orchestra the concert cycles, presenting styles from early baroque to late romanticism and expressionism. Many programs, played in Petersburg, had a great success during tours in cities of Germany.