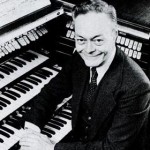 John Grady, director of music for St. Patrick’s Cathedral and an organist there and at the Metropolitan Opera, died in 1990 at his home in Manhattan. He was 56 years old.

John Grady became St. Patrick’s musical director in 1970, the fifth since the cathedral was dedicated in 1870. He had been organist there since 1965, the year he became organist at the Met.

He traveled extensively in Europe giving concerts, including several appearances at Notre-Dame Cathedral in Paris and at Westminster Cathedral in London.