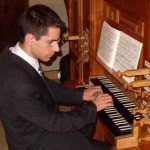 Born in 1982, he began his musical studies at the CNR in Versailles, then at the CNR Superior in Paris where he obtained several diplomas : final diploma in Solfege and Improvisation ; First Prize in Orchestration.

He is currently studying at the same conservatory with courses in performance, harmony, counterpoint, analysis and organology with Marie-Louise Langlais, Françoise Levechin, Alain Louvier, Jean-Pierre Vignon. He is also studying improvisation with Thierry Escaich and Frédéric Blanc.

Jean-Charles Gandrille (Robin) has won various distinctions in the following competitions : “Marcel Dupré” in Chartres (virtuosity, unanimous ; and the Prize of the City of Chartres) ; UFAM in Paris (First Prize : superior degree).

In 2000 he won the Second Prize in Improvisation and the Audience Prize at the Chartres International Organ Competition “Grand Prix de Chartres”. Other honors include obtaining an honorable mention in the General High School Competition in music, and being finalist in the Boëllmann-Gigout competition in improvisation in Strasbourg. 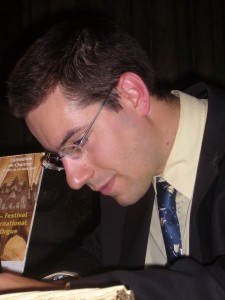