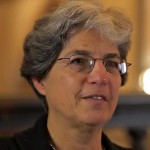 Elisa Freixo has one of the most important carriers in the country at present.

After finishing her studies in Brazil, she lived for four years in Europe, where she studied organ and harpsichord. She attended the Hochschule für Musik und Theater in Hamburg, the Schola Cantorum in Paris, and the Conservatoire de Musique in Rueil Malmaison, France.

Back to Brazil since 1982, she has presented herself here and abroad in organ, harpsichord, and pianoforte concerts, while developing a parallel career as a chamber musician. Living in Mariana, she is responsible for the series of concerts played on the Arp Schnitger organ, installed in the city’s Cathedral.

Since 1985, she has recorded 12 LPs and CDs, of which six are independt production, dedicated to the work of J. S. Bach, Mendelsohn, romantic authors, and a series of 3 volumes dedicated to the Mariana organ.

Her first CD, for the French label Auvidis-Valois, dedicated to the 18th century Spanish repertoire, received the Grand Prix du Disque da Nouvelle Academie Française, one of the highest honors of the music market and the first time awarded to a Brazilian artist.