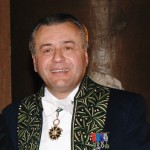 Jacques Taddei, pianist and organist, member of the National Academy of Fine Arts and head of the Marmottan-Monet Museum died aged 66 on 24 June 2012.

Born in 1946 in Nice, he was the head of the Marmottan-Monet Museum since 2007 ; this museum contains the largest collection of works by Claude Monet in the world. Taddei’s life was dedicated to culture and more particularly to music. After studies in philosophy and at the Conservatoire de Paris, he was elected member of the Fine Arts Academy, in the Music Section, in 2001.

In 1980, he won the improvisation grand Prize at the International Organ Contest in Chartres. He then was the holder of the Basilica of Saint Clotilde’s organs from 1993 onwards. Being a performer, he recorded several albums. From 1987 to 2004, he was the head of the Conservatoire de Paris. He chaired the International Summer Academy of Nice and was at the same time the head of the Sacred Art Festival in Paris from 1993 to 2005.