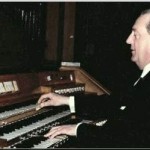 Georges ROBERT, titular organist of Notre-Dame de Versailles for more than a half century has gone Nov. 7, 2001, in his seventy-fourth year. Son of the organist of the Cathedral of Saint-Pol-de-Léon (Finistère), George Robert, who himself had played the organ in this church for 70 years, grand-son of Henry Sibout, organist St.-Catherine Honfleur (Calvados), George Robert, as once said Pierre Denis [The Organ, No. 114, April-June 1965], was a “running without failure, [an] poet of organ like his master André Marchal, [and] interprets anxious to deepen his knowledge of the classics”.

Born April 12, 1928 in Saint-Pol-de-Léon, he was first a student of his father, before arriving in Paris in 1941, at the age of 13, to become resident at the National Institute of Young Blind. He received here of teaching by true masters : Gaston Regular (piano), Eza (violin), Gaston Litaize (harmony) and André Marchal (organ). In 1946 he joined Yves Nat to study piano at the Paris Conservatoire, where he clinched a first prize four years later. Also a student of Suzanne Plé-Caussade and Marcel Dupré, he was awarded a first prize counterpoint (1951), a first prize for fugue (1953) and a first prize for organ (1953). The following year, George Robert was appointed professor of piano at the INJA and are also taught organ from 1969, as the CNR of Versailles (from 1975) and at the Schola Cantorum in Paris.

As church organist George Robert has had only one instrument : the organ Merklin / Gonzalez de Notre-Dame de Versailles, where he was appointed in May 1948. But as virtuoso the organ most major French forums have welcomed and indeed many other European and North America. Winner of the International Improvisation Competition in Haarlem (1955) and the competition Bach in Ghent (1955), the first execution price and improvisation of “Friends of the Organ” (Michel-Richard Delalande Price) in 1957, soloist at Radio-France, founder in 1957 of the Organ Academy “Music and Mountain” to Sarrances near Pau, in 1980 founder and president of the Organ Association of Friends of Versailles and its region Biarritz founder of Organ Academy in memory of André Marchal, a member of the District Committee of the organ to the General Council of Yvelines, correspondent of the High Commission of Historical Monuments of the Ministry of Culture, jury member Grand Prix de Chartres, George Robert was one of his few complete musicians have both a first prize in piano and organ 1st price, which made him not only a brilliant organist but also a pianist touch precise, and even a fine harpsichordist. Keyboard instruments had no secrets for this subtle artist.

He recorded the work’s complete organ works of François Couperin (1965), those of Caesar Franck (1994) and Augustin Barié, as well as French and Spanish music, sixteenth century -XVIIIème, organ Abbey Sarrance Aspe with the Gregorian Choir Pau direction : Jean Spaniol (CD Escale à Toulouse ESC 120). His catalog, although modest, however is representative of the music of his time: there is a piece for piano : Sonata for organ and pages published in the journal “Organ and Liturgy” : Prelude on reeds, Prelude to the Introit of the 1st Sunday of Advent, Offertory for the Second Sunday after Pentecost, For Elevation, For Communion and a Mass in five parts (Huguenin)…