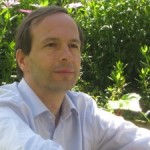 Born in 1964, Gabriel Marghieri has been the pupil of Henri Carol, René Saorgin, Marie-Claire Alain at the Conservatories of Nice and Rueil-Malmaison and Michel Chapuis at the National Superior Conservatory of Music in Paris.

Helder of the Certificats of Aptitude for teaching, professor of organ and harmony at the Conservatory of Levallois-Perret (near Paris) and professor-assistant of improvisation at the National Superior Conservatory of Music in Lyon.

Gabriel Marghieri is member of the Organ Commission dealing with organs not classified as historical monuments at the Ministry of Culture.

He has been invited to give récitals in the main European countries, Russies and the United States.

Composer, he is the author of works for organ, piano. choir and other instruments.

After having been organist of several cherches including St-Paul-St Louis du Marais. Paris, he was named titular organist of the St-Bonaventure Sanctuary in Lyon and of the Sacré-Cœur Basilica of Montmartre in Paris.