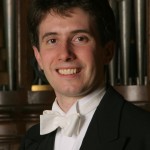 Clive Driskill-Smith was born in 1978 and educated at Eton College, where he was a music scholar.

He began learning the organ at the age of 15 and, during his ‘gap’ year, served as Or-gan Scholar at Winchester Cathedral and as Assistant Organist at Winchester College. The following year he went up to Christ Church, Oxford University. In 1999 he graduated with a First Class Honours degree in Music and in 2001 he gained the Mphil in interpretation and performance. He is currently Sub-Organist at Christ Church Cathedral, Oxford.

Clive is also active as a pianist and bassoonist. He holds the ARCM diploma in Piano Perform-ance and continues to give solo recitals and concerto performances. During this time, he performed with the orchestra at Birmingham’s Symphony Hall, London’s Barbican Centre, Royal Festival Hall and at the BBC Proms in the Royal Albert Hall.

Clive studies the organ with David Sanger and, on gaining the FRCO diploma, was awarded the prestigious Limpus Prize and the Worshipful Company of Musicians’ Silver Medal. In 1999, the Royal College of Organists awarded him a Travelling Scholarship which has funded further study on the Continent with Hans Fagius, Jan Willem Jansen and Harald Vogel. He has given recitals worldwide and recorded as both soloist and accompanist. His extensive repertoire spans six centuries and includes the complete organ works of Olivier Messiaen.