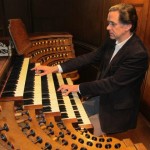 He studied organ and piano at the Sweelinck Conservatory in Amsterdam and in Paris. Since 1970 his numerous highly successful concert tours have taken Ben van Oosten to the foremost international organ venues, where he has emerged as one of the most remarkable organ virtuosos of our time.

In addition to his concert career he gives organ masterclasses in many countries and is Professor of Organ at Rotterdam Conservatory. Ben van Oosten has dedicated himself exhaustively to French symphonic organ music. His recordings of the eight organ sonatas of Alexandre Guilmant and the complete organ works of Camille Saint-Saëns, Louis Vierne, Charles-Marie Widor and Marcel Dupré have been awarded many international prizes (including the Echo Klassik, Preis der deutschen Schallplattenkritik, Choc du Monde de la Musique and Diapason d’Or).

Because of his services to French organ culture Ben van Oosten was honoured on three occasions by the Société Académique Arts, Sciences, Lettres in Paris. The French government created him Chevalier (1998) and Officier (2011) dans l’Ordre des Arts et des Lettres, and in 2010 he was created Knight in the Order of the Dutch Lion by H.M. the Queen of The Netherlands.

Ben van Oosten is Titular Organist of the Grote Kerk in The Hague and Artistic Director of the international organ festival that takes place annually in this church.