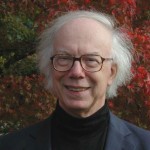 Lionel Rogg’s career was launched with the works of J. S. Bach. After finishing his studies at the Geneva Conservatory with Pierre Segond for organ and Nikita Magaloff for piano, Lionel Rogg gave a series of ten recitals at the Victoria Hall, Geneva, performing the complete organ works of Bach. The success of these performances led to the recording of this impressive programme.

Professor of Organ at the Geneva Conservatory until 2001, Lionel Rogg has welcomed students from all over the world. He frequently gives master-classes in Universities and Honchshulen and is now be professor of organ and improvisation at the Royal Academy of Music in London.

More recently, Lionel Rogg has developped his talents as a composer. His catalogue contains numerous works for organ, piano, for choir and orchestra and for chamber music. He has recently been commissioned by the city of Geneva to write a concerto for organ and orchestra to mark the 1993 inauguration of the new organ (built by Van den Heuvel) in the Victoria Hall, Geneva. He is now organist in charge of this instrument.

In 1989, Lionel Rogg received an Honorary Doctorate from the University of Geneva.