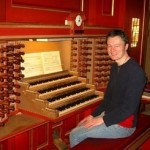 Hayo Boerema was born in Groningen (Netherlands) in 1972.

He studies at the La Haye Royal Conserva-tory where he obtains several diploma : diploma of sacred music (1995), the organ diploma in 1997 and the improvisation di-ploma (1999).

Afterwards, he continues his improvisation training with Naji Hakim in Paris.

At the present time he is organist and choir master at St. Jacob’s Church in Winterswijk (Netherlands).