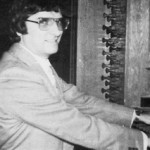 Daniel Boivin was born September 12, 1940 at TOURNAN-EN-BRIE (Seine-et-Marne). He initially began his musical studies with private teachers. Valerie SOUDERES, professor at the National Conservatory of Music in Paris, made him work the piano and it’s at the Music Conservatory of Versailles he pursues the study with Paul BEDOUIN.

Military service, carried out in Algeria, forced him to a two-year break and on his return to civilian life in 1962, he became professor of music education in the schools of the City of Paris.

He began at the same time studying organ with Micheline LAGACHE at the Municipal Conservatory of the fourteenth district of Paris, then at the Conservatory of Nantes, where he obtained a first prize in 1972.

A few years later, Daniel Boivin began to improve the study of this instrument and enters the class Gaston LITAIZE the St. Maur National Conservatory where he won the Award of Excellence in 1980.

Daniel Boivin has given concerts in the provinces and in Paris, including St. Thomas Aquinas and St. Severin.