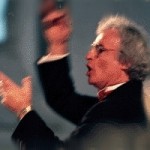 François Bocquelet was born in Calais in 1949. After his studies at Calais (first prize in music theory, sight reading and piano, organ award of excellence, music room and bassoon), he entered the Conservatoire à Rayonnement Regional of Lille. He obtained a prize for piano, an organ and improvisation Excellence Award and a medal in harmony and counterpoint.

After obtaining the Certificate in teaching, he teaches organ and piano at the Academy at the Conservatoire à Rayonnement Départemental from Calais.

Since 1985, he led the Chorale Saint-Joseph-de-Calais, with which he has organized many trips (Quebec, Austria, Alsace) and recorded several CDs, including Christmas carols.