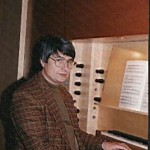 Originally from the Pas-de-Calais, Vincent Leroy made his musical studies at the Conservatoire de Lille. He obtained, in addition to the first prize for harmony and counterpoint, an organ and improvisation Excellence Award in the class of Jeanne JOULAIN. It follows, then, in Paris, teaching Rolande FALCINELLI while studying harpsichord and early music with Antoine Geoffroy-DECHAUME.

In 1977, he was named Great Organ of the holder of the Arras Cathedral. It is also organist at the Church of the Sacred Heart of Marcq-en-Barœul, for which he designed a plan for a new organ, installed in 1996.

Director of the Municipal School of Music LILLE-WAZEMMES since its creation in 1981, he was also professor of harmony at the keyboard at the Lille Conservatory and the University of Lille III, and professor of organ at the Conservatoire Tourcoing .

It regularly invites to be heard as a soloist with orchestra or chorus, in France and abroad, particularly in Belgium and the United Kingdom.

He also participated in several recordings as well as TV reports.