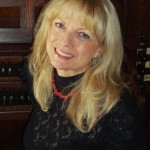 Vera Hermanová studied organ in Brno and in Paris. She is a graduate from the Conservatoire and the “Janácek Academy of Performing Arts”, both in her native town. In Paris she completed her studies with the famous Gaston Litaize by winning “Premier Prix à l’Unanimité” at the “Conservatoire National de Saint-Maur”. She took part in master classes with prominent European organists (Gaston Litaize, Piet Kee, Ewald Kooiman, Guy Bovet, Lionel Rogg ). She took a postgraduate course in musicology at the Arts Faculty of the Masaryk University in Brno, submitting a dissertation on “Olivier Messiaen – Heir of French Organ Tradition” and receiving her doctorate in 1997.

During her university studies she won several organ competitions and began her career of a solo performer, which later led her to most European countries. She has appeared in a number of European culture centres including Prague, Paris, Vienna, Linz, Berlin, Münich, Hamburg, Dresden, Copenhagen, Oslo, Lublana, Utrecht, Haarlem and others. She has been invited to play at a number of major organ festivals at home and abroad (in Great Britain, Germany, Denmark, the Netherlands, Austria, Switzerland, Poland and in Italy).

Vera Hermanová’s wide repertoire includes music from late Renaissance, Bach and major romantic pieces to 20th century music, which is her favourite. Besides Czech organ music, the interest in which is only natural, her Paris schooling predestined her for special attention to French organ music of all periods.