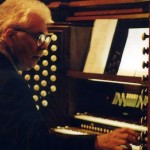 ROBERT SUTHERLAND LORD, Professor Emeritus of Music, has served the University of Pittsburgh for 44 years as teacher, scholar, and organist. His AB degree in music is from Dartmouth College where he was the first music major to be appointed a Senior Fellow. Later, Dartmouth honored him with a Reynolds Fellowship for International Study. In the meantime, he earned MA and Ph.D. degrees in music history under the supervision of Leo Schrade at Yale University. Prior to coming to Pittsburgh, he taught for three years at Davidson College in North Carolina.

His advanced studies in organ and improvisation were in Paris with Jean Langlais, organist at the prestigious Basilica of Saint Clotilde. They enjoyed a close friendship for over thirty years and he was in Paris at the time of Langlais’ death in 1991. Among his other organ teachers are Maurice F. Longhurst (Dartmouth College), Clarence Watters (Trinity College, Hartford, Connecticut), André Marchal, Heinz Wunderlich (Hamburg, Germany), and Rolande Falcinelli (Paris).

French organ music of the nineteenth and twentieth centuries remains the center of Dr. Lord’s research. He is a recognized authority on the music of Charles Tournemire, who was a student of César Franck and the teacher of Jean Langlais. All were titular organists at the Basilica of Sainte Clotilde in Paris, the site of several of Dr. Lord’s organ concerts. He has played four concerts at Notre Dame Cathedral in Paris and the reviewer of his concert at the Chartres Cathedral commended him for his interpretations of French music. He was invited to perform works of Tournemire in King’s College Chapel, at Cambridge University (England). His most recent publication provides new documentation on the Sainte Clotilde organ.

Over the years Dr. Lord has brought musical distinction to the Heinz Memorial Chapel (University of Pittsburgh) combining his musicological studies with his organ performances. He has given over 160 concerts on campus and, in his spare time, has played for nearly 4,000 Heinz Chapel weddings.

Since his retirement in 1999, he has given concerts in France, England, and Scotland. This past June he received a standing ovation for his performance at the renowned Piccolo Spoleto Festival in Charleston, SC.