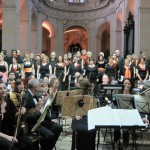 ORCHESTRE DE LA BASTILLE
The symphony orchestra of about 45 young amateur musicians, created in Paris in 2009 by the leader Emilie POSTEL-VINAY, focuses on the one hand to play the great symphonic repertoire (Haydn, Schubert, Ravel, Mendelssohn, Dvorak), but also concertos for which he collaborated with renowned soloists such as Thierry BARBÉ first solo bass of the opera in Paris.
The orchestra of the Bastille also approaches music with choirs, both in opera in concert version, in oratorios, like this year with the choir Canto Jubilo, and Mozart’s Requiem. He also approached the opera with the “house doctor” by Georges Bizet in new version.
The orchestra is directed by Emilie POSTEL- VINAY,graduatedfromtheMusicSchoolofBlois, and State Diploma holder of double bass – she wrote a method of double bass. For Musicora she ledabigorchestramadeupof100doublebasses. She founded the Quartet Harlequin, violin, piano, clarinet and double bass, with which she ensures many staged shows.
She led ‘Dido and Aeneas “by Purcell, with students of the Conservatory of Noisy-le-Grand.

CHOIR JUBILO CANTO
This choir of 50 amateur singers, was created in Paris in 2010, by the mezzo-soprano Odile DESCOLS.
Its repertoire consists of baroque oratorios, Vivaldi,Monteverdi,Handel,butalsoclassicaland romantic, Beethoven, Dvorak. HehadtheopportunitytosingattheRoyalChapel of Val de Grace, Chapel of the Military School, St. Roch Church, St. Germain l’Auxerrois Church in Paris, but also in the castles of the Loire Valley, and at Chartres Cathedral.
The choir has worked under different young conductors such as William Jeu, Antonin Rey, and this year Emilie POSTEL-VINAY. He has at heart to allow young conductors to direct, to give them the opportunity to work with singers.
The choir is directed by Odile DESCOLS, mezzo soprano soloist who has worked with many conductors and orchestras in Europe and Japan (Claudio ABBADO, Jacques MERCIER, Jean- Jacques WERNER, National Orchestra of Île-de- France, Orchestra Leon BARZIN, Jean-Walter AUDOLI, Ellipses, Audinovsky…).
As choirmaster, she led numerous ensembles in Paris, the choir of the Lycée Louis le Grand in Paris for over 12 years. She teaches singing at the Schola Cantorum in Paris.