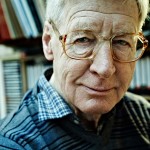 Born on St Cecilia s Day 1930, Peter Hurford studied briefly at the Royal College of Music in London, before taking degrees in music and law at Cambridge University.

White Master of the Music at St Albans Cathedral (from which he retired in 1978 after 21 Years service) he founded the International Organ Festival which in its thirty years. has done much to restore the organ to the mainstream of music-making, and through bits competitions has launched many now-famous artists.

He is one of the most recorded instrumentalists of the past twenty years : November 22, 1930 – Minehead, Somerset, Englandnown particularly for his interprétation of Bach’s complete organ music – recently reissued by Decca on seventeen compact discs. (Volume 3 of the original LP series was awarded «Best Instrumental Recording», by The Gramophone magazine in 1979 – still, today, the only occasion that this prestigîous distinction has been won by an organist. His separate Bach recordings for the BBC occupied 34 week, broadcast programmes in 1980 (repeated in 1982), and in 1990 he completed them with a new series of 8 concerts broadcast on the occasion of his sixtieth birthday.

He has offered regular organ teaching at Cambridge for fifteen years, was visiting Betts Fellow in Organ Studies at Oxford University in 1992/1993, and has held visiting professorships at the Universities of Cincinnati and Western Ontario.

Peter Hurford is an Honorary Member of the Royal Academy of Music, an Honorary Fellow both of the Royal College of Music and of the Royal School of Church Music, and holds honorary doctorales in music from the University of Bristol, and from Baldwin-Wallace College, Ohio (home of the Riemenschneider Bach Instituts).

The Queen honoured him with the OBE in 1984.