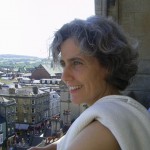 Margareta Hürholz was born in 1954 and was appointed professor of organ at the Cologne Musikhochschule in 1997 where she had been a student from 1970 to 1978.

Further studies followed with Marie-Claire Alain in Paris preceding the commencement of a demanding international playing and adjudicating career.

Since 2003 she has initiated an annual series of new music repertoire concerts centred on the Ahrend organ of the Ursuline Church in Cologne where she is organist.