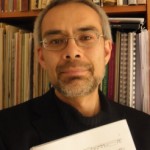 Born in London in 1966, PETER BANNISTER began his musical studies with David de Warrenne (piano) and John Shepherd (organ). After obtaining the piano performer’s diploma of the Royal College of Music in 1985, he read Music at King’s College, Cambridge, where he gained a first class BA and an M. Phil in Musicology. He completed his studies in Paris between 1989 and 1993 with Genevieve Ibanez, Michel Beroff (piano) and Naji Hakim (composition), where he currently lives as a freelance musician.

He has been the winner of several prizes at national and international level as a composer and performer: Prix André Caplet for composition, Académie des Beaux-Arts (Institut de France) 1999 Nürnberg International Organ Improvisation competition (Johann-Pachelbel-Preis) 1996 Chartres International Organ Competition – improvisation 1992 Royal National Eisteddfod of Wales – piano 1984 He has also been the recipient of prizes and scholarships from Cambridge University, the Countess of Munster / Leverhulme Trusts and the French Government. In 2007 three of his works received awards at the International Composition Competition in San Sebastian (Spain).