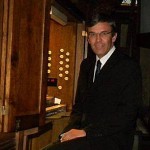 Born in Vannes in 1959, Michel Jezo studied organ there and then at the National Regional Conservatory in Nantes where he obtained a First Prize in Organ in 1982 in the class of Micheline Lagache.

Pursuing his studies with Jean Boyer at the National Regional Conservatory in Lille, he obtained in 1986 the diploma of improvement.

Co-titular organist of the great organ of Vannes Cathedral since 1984, he was in 1986 named assistant organist at the Church of St. Pierre de Chaillot in Paris.