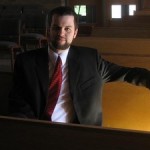 Equal parts performer, composer, and educator, Matt Curlee has served on the faculty of the department of music theory at the Eastman School of Music since 2007.   As both an advocate for, and avid practitioner of improvisational music, Curlee has a particular interest in ear-brain interactions and the intuitive processes that unify composition, improvisation, and performance.  This area of research has fed directly into his work at Eastman, where he has designed an advanced skills curriculum for the undergraduate honors program. Curlee has since extended and adapted the method to serve other populations of students – core undergraduates and those pursuing graduate conducting degrees.

As a composer, Curlee’s recent work has focused on the interplay between modern theoretical and experimental physics and the arts.  Notable among these projects, Histories is a continuing set of collaborations between composer Matt Curlee and physicist Regina Demina, exploring the fundamental narratives, at various scales, that form the fabric of reality.   Recent commissions include new music for the Eastman Percussion Ensemble’s 2016-17 season, a work premiered and recorded by percussionist Michael Burritt with The United States Air Force Band in 2018, music for the Strong National Museum of Play, a piece for the cutting-edge RPS Collective, a saxophone, piano, percussion trio, and a set of arrangements celebrating the 40th anniversary of the release of Stevie Wonder’s Songs in the Key of Life.

In 1996, at the age of 19, Curlee was one of the youngest organists ever to win the prestigious Grand Prix de Chartres.  After several years of touring in the US and Europe, appearances with orchestras, inaugural performances on new instruments, and two releases as a solo artist, he began to gravitate towards artistic collaborations. In 2002, with four other Eastman alums, he founded Neos, a contemporary jazz chamber ensemble built around the pipe organ.  Neos toured and recorded for several years, with Curlee serving as its artistic director and principal composer, and ran a commissioning program that generated new music from composers around the world. A native of Greensboro, North Carolina, Matt has lived in Rochester, New York since 1994, and holds two degrees and a performer’s certificate from Eastman.