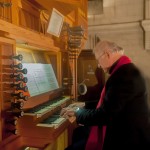 Marciszuk Marian was born in Lublin (Poland) January 16, 1952.
He comes from the age of 6 years in Primary School in that city music (violin class and piano).
He continued his studies at the Lublin Music High School where he chose as subjects the organ, piano, singing, and learns harmony and counterpoint. He finished high school with the first prize for organ and piano.

He then entered the National Conservatory of Music in Warsaw in the organ class led by Joachim Grubich, the most famous Polish organist. It also deepened his knowledge of harmony (classical and modern), composition, music theory, counterpoint, organ music literature.

Marian Marciszuk also beginning to give concerts in Poland and abroad. It performs particularly in 1973 a tour in East Germany.

While pursuing his studies, he was organist of the Warsaw Military Church for a year. In 1975 he was appointed professor of music at his former high school in Lublin and at the same time organist of Notre Dame Niepokalanów, one of the most important Marian shrines in Poland.

In 1976, he spent his “Master of Art”. A few months later, he comes to France, joined the Master Class Gaston LITAIZE at the Music Conservatory of Saint-Maur. He obtained the 2nd prize for virtuosity in 1977, the 1st Prize in 1978 and the Award of Excellence.