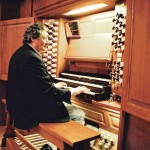 Loïc Mallié was born in 1947 in La Baule. Very young Loïc Mallié decided to pursue advanced musical studies while he was still at school. In 1966 he passed the National Baccalauréat (Philosophy section) and in 1971 he obtained a law degree. During that time he was taught in the academy of music in Rennes and he obtained a First prize in organ in 1968.

Loïc Mallié is a regular guest in numerous festivals to perform on the organ in concerts or masterclasses in France and abroad (Germany, Italy, Spain, Iceland, Poland, Norway, Great Britain, Canada,…)

He also composed important pieces of works for the organ, the piano, chamber music, the orchestra and choirs, wich were published by Lemoine, Billaudot, Notissimo and Fuzeau.