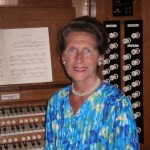 Jennifer Bate is in the top rank of international organists and has long been a favourite at all the world’s great festivals. Many composers have written for her, inspired by her phenomenal technique and ability to bring out the colours of the organ. Jennifer gives master-classes worldwide and lectures on a wide range of musical subjects. In addition to a performance of Livre du Saint Sacrement in Westminster Cathedral and a solo BBC Promenade concert (La Nativité), Jennifer’s 2008 programme included recitals in Austria, the Canaries, Croatia, France, Germany, Holland, Italy, Monaco and Spain.

In 1990, Jennifer’s artistry and outstanding contribution to music received international recognition with the Personnalité de l’Année award by the French-based jury. She was only the third British artist to achieve this distinction, after Sir Georg Solti and Sir (later Lord) Yehudi Menuhin. In 1996, Jennifer was granted Honorary Citizenship of the Italian province of Alessandria for her services to music in Northern Italy over 20 years. In 2002, she was elected a Fellow of the Royal Society of Arts. In 2007, she was awarded an Honorary Doctorate in Music by Bristol University and, in 2008, was made an OBE in The Queen’s Birthday Honours List.

Jennifer is recognised as the world authority on the organ works of Olivier Messiaen, with whom she worked extensively and became his organist of choice. Her world première recording of his last masterpiece for organ, Livre du Saint Sacrement, had exceptional international success, winning a Grand Prix du Disque. In 1995, Jennifer opened the Messiaen Festival at l’Eglise de la Sainte Trinité, Paris, where his complete organ works were performed and recorded. Among numerous awards for her CD, were the Diapason d’Or (France) and Preis der Deutschen Schallplattenkritik.