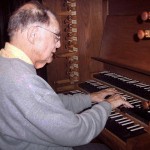 Jean Wallet is an french organist, improviser and teacher.

Born in 1930, Jean Wallet began his musical studies at the Nice region National Conservatory in 1945 where he learned the piano, violin and harmony.

In 1949 he began studying the organ at the Institute for Blind Youth in Paris under the direction of Master André Marchal he has the honor of replacing for years with great organ of Saint Eustache .
He comes right at the end of study at the Paris Conservatory in the class of Rollande Falcinelli, where he obtained a first organ and improvisation price. Appointed at the request of Peter Cochereau, professor at the Nice Conservatory, where he taught from 1964 to 1998 (adult classes and improvisation).

Appointed titular organist of the Cathedral of Nice in 1964, he stayed 40 years and receive the title of Knight of St. Gregory.

Also in 1964 he became organ professor (adult class) and improvisation at the Conservatory of Nice, a position he held until 1998.