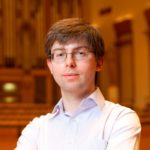 Born in 1980, Jean-Philippe MERCKAERT began his musical studies in Mons, Belgium. He graduated from the Conservatoire National Supérieur de Musique in Paris where he studied with Olivier Latry and Michel Bouvard, and earned the first prize in organ. He also obtained his Master’s degree in classical composition at the Royal Conservatory of Mons.

He has won prizes at several international organ competitions, including the second prizes in Freiberg (2007) and Bruges (2009).

In 2003, Merckaert took a year’s sabbatical to become the resident organist at the Sapporo Concert Hall KITARA in Japan. Presently living in Tokyo, he appears regularly in concerts as soloist or with orchestras all over Japan. From 2011 to 2014, he was organist at the Tokorozawa Civic Cultural Center MUSE, and currently at the Nasunogahara Harmony Hall.