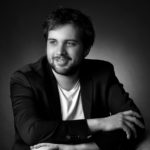 A native of the Charente, Thomas PELLERIN studied the organ with Olivier Vernet, Jean-Luc Étienne, Éric Lebrun and Johann Vexo, and also studied the harpsichord with Françoise Marmin in Angers. He completed his training at the C.N.S.M.D. in Lyon, brilliantly gaining two Master’s degrees in organ and continuo, studying under François Espinasse, Liesbeth Schlumberger and Yves Rechsteiner.

He initiated the Italian Renaissance organ construction project in Saint Cyhard church in Pranzac (Charente) and is founder and artistic director of the Festival “Au gré des Arts”, whose first edition was held in 2011.

In 2013, he participated in the premiere of Gabriel Marghieri’s work “Mainte nuit sans repos” with the composer and the actor Francis Perrin. Thomas Pellerin holds the Certificat d’Aptitude in organ teaching and a Master’s degree in pedagogy. After teaching organ and harpsichord at Roanne Conservatoire, he has been teaching organ at the Conservatoire à Rayonnement Régional in Angers since 2016.

Thomas Pellerin is Organiste Titulaire of the Dangeville/Cavaillé-Coll/Beuchet organ of Saint Maurice Cathedral in Angers since February 2018.