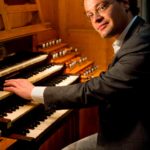 Jean-Baptiste MONNOT is currently the titular organist of the Cavaillé-Coll organ at St. Ouen Church in Rouen.

Born in 1984 in France, he began studying piano and organ at age 12. In 2002,  he won the 1st prize awarded unanimously by the jury of the 4th edition of Young Organist Competition presided over Marie-Claire Alain and he received his Bachelor in Music degree (Diplôme d’études musicales régionales).

In May 2007 he received his Master’s Degree (Diplôme de Formation Supérieure) in organ with first class honours, in the class of Olivier Latry and Michel Bouvard before he improved his skills from Bernhard Haas in the Stuttgart Hochschule für Musik.

In 2010 he managed the creation of the incidental music for Macbeth by Jean Guillou in the framework of a Japanese tour (Kyoto concert Hall, Nagoya concert Hall) under the supervision of Masaru Sekine. Soon after, he was appointed as artiste-in-residence in St. Louis Cathedral, New Orleans. In 2011 he gave a concert as a soloist with the Louisiana Philharmonic Orchestra and in 2014, he gave a concert at the Österreichischer Rundfunk of Vienna (Austria), broadcast live.