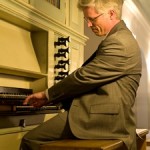 Hans Davidsson received his Soloist Diploma from the Conservatory of Göteborg, Sweden in 1985, having studied with Hans Fagius. A special interest in early music led to three years study with Jacques van Oortmerssen at the Sweelinck Conservatorium in Amsterdam and post-graduate research on North German Baroque organ music focused on Matthias Weckmann for the University of Göteborg. In September 1991, his thesis Matthias Weckmann : the Interpretation of his Organ Music (writing, edition and recording) was defended and he became the first doctor of music performance in Sweden.

Since 1974 he has given regular recitals in the Scandinavian countries including tours to England, Germany, the Netherlands and in the USA.

In 1986, he was appointed organ teacher at the School of Music, Göteborg University and appointed organ professor in 1988. Since 1989, he was responsible for the establishment of an organ center for research in performance practice and a program of organ instruments which was built according to historical principles (such as a full-grown North-German baroque organ, which was inaugurated in 2000).

In 2001 he was awarded the ÅForsk research prize (the Research Foundation of the ÅF Group), one of Sweden’s most distinguished research awards, and in January 2004 he was awarded the King’s medal, the highest national award in Sweden, for “significant accomplishments in musicology and music, primarily in the fields of organ research and organ education”.