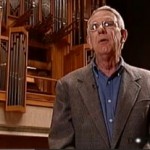 Frank Speller, Associate Professor Emeritus of Organ at the University of Texas at Austin, has been described in reviews as “one of the most brilliant organists in America” and a “remarkably gifted performer”. He has appeared in recitals in Europe, the US, on National Public Radio, and in one national and three regional conventions of the American Guild of Organists.

His organ and choral compositions are published by various American editors, and two commercial compact discs of his works have been released by Albany and Pro Organo. Dr. Speller was integral in developing the Visser-Rowland organ of UT Austin, the largest tracker organ in the United States when it was completed in 1981.

His students have won many competitions and prizes. He holds a D.M.A., University of Colorado ; Performer’s Certificate, Indiana University, and studied in Paris with Jeanne Demessieux.