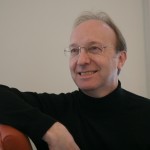 David Titterington is the Artistic Director of the International Organ Festival at St Albans and one of the world’s leading concert organists. He made his debut at the Royal Festival Hall in 1986 launching a career that has since taken him to many of the great international festivals and concert halls including Herkulessaal in Munich, Schauspielhaus in Berlin, Roy Thomson Hall in Toronto, Auditorio Nacional in Madrid, Megaron in Athens, and the Musachino Concert Hall in Tokyo. He was a featured artist of the European Festivals Association’s 50th anniversary celebrations in 2002 performing works by Kurtag and Messiaen at the Festival of Festivals in Geneva.

Committed to contemporary music he has premiered a number of significant works, in particular Diana Burrell’s 1990 BBC Proms Commission Arched Forms with Bells, and Terce for organ & accordion at the Spitalfields Festival, Hans Werner Henze’s Symphony No.9 at the 2000 BBC Proms with the BBC Symphony Orchestra under Ingo Metzmacher, Toccare Incandescent by Stephen Montague, commissioned by the South Bank and premiered at the Royal Festival Hall to mark the 50th anniversary of the building of the Hall’s organ, and Giles Swayne’s Fourteen Stations of the Cross commissioned for the 25th anniversary of the Cambridge Festival in King’s College Chapel. Other first performances include Lyell Cresswell’s The Blackness of Darkness (New Zealand Festival commission), Petr Eben’s Job (Harrogate Festival commission), and Peter Tiefenbach’s Opening Day (Guelph Festival commission). In 2001 he collaborated with Maurizio Kagel in the London performance of Rrrrrr, and with Jonathan Dove in a premiere performance of Niagara. He gave the New Zealand premiere of Olivier Messiaen’s Livre du Saint Sacrement and the Finnish premiere of Petr Eben’s Organ Concerto No 1 with the Lahti Symphony Orchestra,

In addition to CD’s of works by Olivier Messiaen, Petr Eben and Johann Ernst Eberlin, David Titterington has recorded more than thirty programmes for the BBC and innumerable for radio and television networks world-wide, including the complete works of César Franck from the Abbey of St Étienne, Caen.

David Titterington was Organ Scholar at Pembroke College, Oxford and continued his studies in Paris with Marie-Claire Alain and Susan Landale at the Conservatoire at Rueil-Malmaison, where he won a unanimous Premier Prix. In 1996 he was appointed Head of Organ Studies at the Royal Academy of Music, London. Since 1993 he has given annual master classes at the Dartington International Summer School and since 1997 he has been Visiting Professor of Organ at the Liszt Academy, Budapest.

Some recent engagements include Poulenc’s Organ Concerto conducted by Jan Latham Koenig at the Turin Opera House, the premiere of a new work by Pavel Novak for organ, soprano and trumpet at the Dartington International Summer School, a debut recital at Moscow’s International Performing Arts Centre, recitals as part of the South Bank’s Messiaen Festival Towards the Canyons and the Stars, Messiaen’s Livre du Saint Sacrement at the Brompton Oratory, and recitals at the Philharmonie, Luxembourg, in Waldkirch, Germany on the historic Walcher organ and a solo recital at the BBC Proms in 2009.