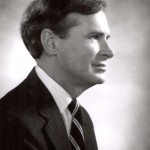 Clyde Holloway came to prominence in 1964 when he won the National Young Artists Competition of the American Guild of Organists in Philadelphia. This achievement inaugurated a distinguished concert career that continues to receive high acclaim throughout the United States where he performs under the auspices of Karen McFarlane Artists. He has performed for numerous National and Regional Conventions of the American Guild of Organists and has appeared in recital in Mexico City, the West Indies and Europe.

Dr. Holloway earned degrees from the University of Oklahoma and Union Theological Seminary where he was a student of Mildred Andrews and Robert Baker, respectively. The title of his doctoral dissertation was The Organ Works of Olivier Messiaen and Their Importance In His Total Oeuvre, a volume which remains one of the foremost monographs concerning this music. During this extensive study he worked with the composer on several occasions, examined his works at the organ of the Church of the Holy Trinity in Paris and performed under his supervision. As a Fulbright Scholar at the Amsterdam Conservatory, he has worked with Gustav Leonhardt in the study of organ, harpsichord and chamber music.

Dr. Holloway began his teaching career in 1965 as the youngest member of the faculty of the Indiana University School of Music. In 1977, he joined the faculty of The Shepherd School of Music at Rice University where, in addition to establishing the organ program, he has served as Chairman of the Keyboard Department and Director of Graduate Studies. Dr. Holloway’s students have been particularly successful as teacher, church musicians, recitalists and recording artists. As Organist and Choirmaster of Christ Church Cathedral in Houston for many years, he directed one of the prominent church music programs in the country. In June of 1993, he was named Honorary Lay Canon and Organist and Choirmaster Emeritus.

Renowned as a gifted pedagogue, Dr. Holloway has served on the Committee for Professional Education of the American Guild of Organists and has addressed two biennial conferences of the National Conference on Organ Pedagogy, founded in 1982. He is in demand as a leader of workshops, master classes and as an adjudicator for competitions. He has served as a member of the jury for numerous competitions including the Concours de Europe, the Fort Wayne Competition, The Music Teachers National Association Competition, the National Young Artists Competition of The American Guild of Organists and the Grand Prix de Chatres. In 1994 he was invited to perform for the Bicentennial Festival of the celebrated Clicquot organ in the Cathedral of Poitiers, France, and to serve as a member of the jury for the international competition held at the end of the ten-day festival.