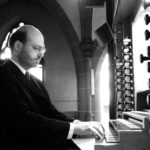 Christian SCHMITT-ENGELSTADT, born in 1967 in Ingelheim a. Rhin, is a cantor and organist at the Lutherkirche Worms.

From 2001 to 2010, he was a lecturer for the Musikhochschulen Mainz and Frankfurt / Main orchestras.

Radio recordings were made at SWF, BR and Radio Suisse Romande. He also recorded several CDs.