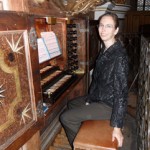 In 1987-1991 she studied organ with Michael Radulescu and harpsichord with Gordon Murray at the Hochschule für Musik in Vienna. Later came studies with William Porter in Boston and Daniel Roth in Paris.

After taking her diploma in sacred music, organ, and harpsichord, Bine Katrine Bryndorf began a wide-ranging career as a soloist and chamber musician. She was engaged as an assistant to Michael Radulescu in Vienna from 1991 to 1995. In 1994 she was engaged as an associate professor at the Royal Danish Academy of Music in Copenhagen, and in January 2001 she was appointed a professor at the same institution. Since 1996 she has also been the organist at Vartov Church, copenhagen. In 1999-2000 she was The Danish Radio’s first Artist in Residence. She also teaches master-classes in Europe and the USA and is a jury member in organ competitions.